White Privilege is Real: I Am White and Privileged

Alison Shields wrote the following article about White Privilege. She was my intern last summer.  It is about her experience, and although it may not be yours, please respect her feelings and beliefs. 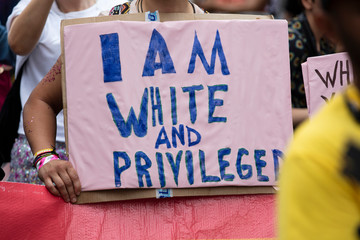 White Privilege is Real: I Am White and Privileged

The controversial concept of white privilege has been circling for decades, while examples of it are demonstrated throughout society. Whether it’s through the media, institutional practices, or social norms, White people are historically more advantaged when compared to their minority counterparts.

I realized my White privilege during my years here at Indiana University. From my point of view, as a White woman, white privilege is real, and sometimes it takes experiencing uncomfortable situations to understand this.  We learned in class about multiple examples of white privilege. We learned about how White people don’t have to worry about what they wear or the tone they speak in because it will not be misinterpreted due to their race. This is very true in my life as I have witnessed my friends and allies be discriminated against solely due to “social norms.”

During my Freshman year, I lived in the dorms with my friend from high school who is Black. We had a great time together. We were always laughing but also respectful to all of the other girls on our floor. One evening, we were up watching a funny show when we heard a loud knock. We opened up our dorm door to IUPD, the school’s police department, telling us we had a noise complaint. Although it was only 9:30 pm, and quiet hours weren’t until 10 pm, we were asked to leave our room and talk to the officers in the hallway. Being the confused freshman, we asked the officers who would file this complaint and what the consequences were for us. We found out that our RA, who is White, filed the complaint because she thought we were too “rowdy” and doing something illegal.

We were not doing anything illegal, and that it was common for other girls on the floor to laugh and play loud music until 10 pm. The officers recognized that we weren’t doing anything wrong and even apologized to us for the interruption. After they had left, we were not interested in the show anymore and weren’t laughing. Instantly, my roommate brought up the fact that this was a discriminatory action that was taken upon us, and that if I weren’t there, something far more dangerous could have happened. She said they probably wouldn’t have believed her if she was with her other Black friends, and that for once she received the benefits of white privilege.

Meanwhile, I am thinking about how my RA called the police department without even checking on us herself. I knew this was an act of hate but had never experienced anything like this because of my race. In my opinion, this whole situation had everything to do with race and racial profiling.

Growing up in an all-White family, I never encountered these injustices until I lived with someone from a minority group, or took classes that explained the concept of white privilege.
Looking back, I remember countless times that I was advantaged just because of my race. In high school, I could walk around the hallways during class without being asked if I had a pass. I can wear my hair any way I want without being told that it isn’t professional. I can talk in any tone or volume and swear openly in a conversation without it being negatively attributed to my race.

In conclusion, I can say white privilege is real. When I have gone home to my family and brought up the concept of white privilege, they act confused and say they have never heard of the term. I try to explain it to them using examples from my life, and they still don’t think that White people are more advantaged than minority groups. They bring up the concept of pulling yourself up by the bootstraps and getting over the past of racial discrimination. The truth is, racial discrimination is still being practiced today, and not even being able to understand the concept of white privilege furthers this argument.

If one is not able to look outside of themselves to notice injustices that are occurring in the world, then they are continuing this problem and perpetuating racism. To change something, we must talk about it even if it makes us uncomfortable.

The first step we can take is involving ourselves, our peers, and family members in difficult but necessary conversations about ways in which White people are more advantaged than their minority counterparts. We can provide personal examples, and even statistics about ways structures have constrained minority groups to back up our arguments. Engaging with and instilling that knowledge into people who don’t understand is another step closer to reducing racial discrimination.

If you are the victim of racial discrimination then contact Civil Rights Attorney, Mark Nicholson at 317-667-0718.